Following sell-out performances around New Zealand in 2018, the Royal New Zealand Ballet is delighted to bring Tutus on Tour to venues around Aotearoa in 2019.

See the dancers perform classical favourites and contemporary works, tailor-made for intimate venues, and suitable for all ages.

Tutus on Tour is a fantastic opportunity to see your critically-acclaimed national ballet company. With one show only and tickets priced at just $25-$35 for adults ($10-$20 child) this is guaranteed to sell fast.

Bournonville’s Napoli and Flower Festival at Genzano, in beautiful traditional costumes designed by Gary Harris. Part of the RNZB’s repertoire since the 1950s, these are true classics sure to delight young and old alike.

It is midnight in a Viennese toyshop. As moonlight illuminates the glass cases full of beautiful toys, the toys themselves magically come to life and dance. The Fairy Doll, the loveliest and most expensive doll of them all, performs an enchanting pas de trois, accompanied by two mechanical harlequins who compete for her attention.

Flames of Paris is an epic production, set on the eve of the French Revolution and with a mix of historic and imagined characters, including Louis XVI and Marie Antoinette. The pas de deux, most often seen by itself as a gala showpiece, is a celebration of freedom, in which the revolutionary hero and heroine, Philippe and Jeanne, celebrate their marriage as the first newly-weds of the new Republic.

RNZB Artistic Director Patricia Barker commissioned Brian Enos to create Nae Regrets for Grand Rapids Ballet, Michigan, in 2013. Traditional Scottish music is given a techno twist by Martyn Bennett as a traveller through the Highlands meets an array of characters and situations, often with a glass – or three – in hand. 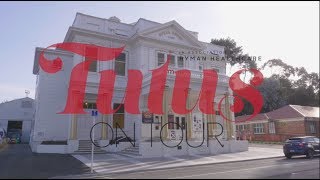