They went with songs to the battle, they were young.
Straight of limb, true of eye, steady and aglow.
They were staunch to the end against odds uncounted,
They fell with their faces to the foe.

They shall grow not old, as we that are left grow old:
Age shall not weary them, nor the years condemn.
At the going down of the sun and in the morning,
We will remember them.*

The Royal New Zealand Ballet was honoured to collaborate with the New Zealand Army Band and distinguished New Zealand composers and choreographers Dwayne Bloomfield, Gareth Farr, Neil Ieremia and Andrew Simmons, in this special programme of works to mark the centenary of World War One.

Neil Ieremia’s work was inspired by Warrant Officer Dwayne Bloomfield’s tone poem Passchendaele, premiered by the New Zealand Army Band on Anzac Day 2009. Andrew Simmons, whose haunting works for the RNZB, Through to You, A Song in the Dark and Of Days, have made such an impression on New Zealand and international audiences, returned to New Zealand to work with composer Gareth Farr (The Wedding, Smashing Sweet Vixen) on his fourth commission for the RNZB.

The New Zealand Army Band performed live in all venues throughout the tour.

*Laurence Binyon For the Fallen, September 1914 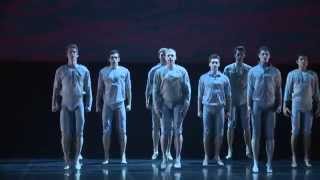 In the Royal New Zealand Ballet’s Salute, four works (Dear Horizon, Soldier’s Mass, Salute and Passchendaele) combine in a triumph of the human spirit – and the company’s artistry … Haunting melodies and percussive volleys of brass, performed superbly by the New Zealand Army Band, erupt from the pit …

From the powerful fevered opening with bodies hurtling across the stage, to the final image of dead soldiers and grieving lovers, and the final, ominous knock on the door, all the dancers perform intensely and with great skill.

The strength of unison is immense in this work but the strength of each individual dancer is electrifying and terrifying as we reflect on war without boundaries and war still in our world today ... This is Ieremia at his best and it is engrossing on every level ... Passchendaele is a work that brings each artistic element together brilliantly and it is impossible to disconnect them.